The Ahr valley in the Eifel region has always been aware of the best way to market itself – like this text from a tourist brochure: “The idyllic wine villages along the Ahr are strung like pearls on a precious necklace. through a strange rocky landscape … a Mediterranean climate offers the grapes of the Ahr valley – the contiguous northernmost red wine region of Germany – optimal conditions. “

This region and its small villages became a bastion of wine tourism in the 1960s and 1970s, especially during the wine festivals that saw the coronation of the wine queen, when tourists came here in specially organized trains.

Later, many day trippers from Cologne and Bonn came to travel the red wine route from Altenahr to Bad Bodendorf above the romantically situated Ahr river. Then the hikers tasted a glass of wine around the villages of Dernau and Mayschoss.

Since the great flood of July 14, when the Ahr turned into a raging river, the romantic atmosphere of the wine region has abruptly ended – at least for now.

The wine village of Mayschoss destroyed by floods

A spectacle of devastation

A good three weeks later, Mayschoss still looks like a bomb hit him – even though a lot has already been cleaned up. Some even speak of a “zero hour”. Destroyed houses, a musty smell in the air, dust and garbage in the streets. Some of the 950 inhabitants of the town are thinking of giving up. This is also the case with Siedentopp, a retired couple. Their family vacation home, which had just been renovated as part of the village’s renovation program, is completely ruined.

“At first, the house was not accessible because of the 20 cm of oil sludge on the aisles and blocked doors,” says Claudia Siedentopp. “When we entered we were presented with a picture of devastation. Everything had been thrown all over the house.” It has since been emptied.

The oil tanks in the basement are on display. The kitchen floor that covered them is gone. Only a few planks placed allow people to balance themselves on it. The beams of the historic listed house with its neat half-timbered facade are starting to mold.

The Siedentopps do not yet know whether they should continue. Like most villagers, they were also not insured against damage caused by flooding. 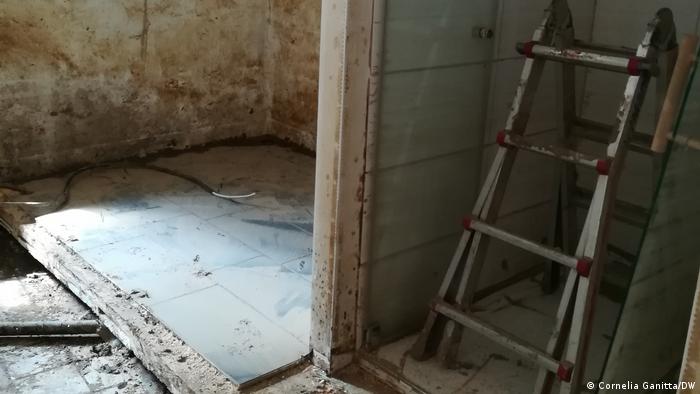 Those who stay do everything to keep morale up while working. “You can’t get bogged down. Until you think about it, you’re fine,” says Alina Sonntag, marketing manager of the world’s oldest winegrowers’ cooperative (WG), which is over 150 years old. old woman.

460 members of Mayschoss, Altenahr and Walporzheim are united under its roof. Of these, half are winegrowers who cultivate a total of 150 hectares of vines. “We are now focusing on the harvest,” says Sonntag. “Right now it’s actually the busiest time of year due to plant protection and foliage work.” 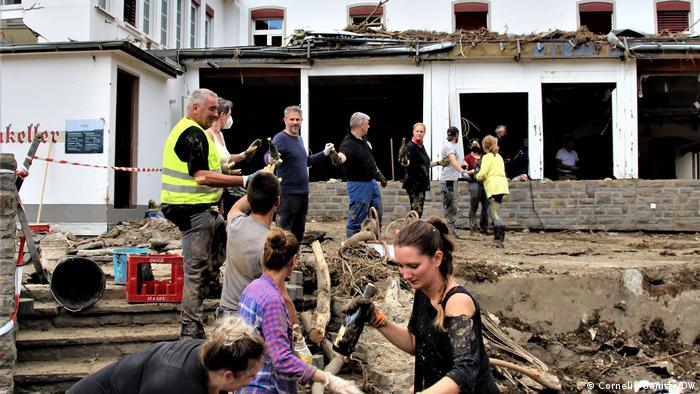 Volunteers collect the bottles of wine that are still intact

Winegrowers from the Palatinate and the Moselle came to help with labor and equipment. Meanwhile, in front of the WG building, two dozen volunteers formed a chain to retrieve the intact bottles from storage. Outside, they can be rinsed and then sold. “Many customers don’t worry if the labels are damaged,” says the woman who has once been declared queen of wine at a wine party. “They want to support us by buying the wine. Internet distribution is now the only long-term sales opportunity.”

The bar, the wine museum, the exhibition center where the wine festivals were held in the fall, the four hotels and ten restaurants – except for two – were destroyed. There is no longer even a baker or butcher.

Instead, it’s currently crowded with strangers helping out. Among them are the THW (German Federal Technical Relief Agency), the Bundeswehr (German Armed Forces), the police, traders trying to run water and electricity, and engineers and structural experts scoring with green crosses the houses that are to be demolished. The question that is currently preoccupying everyone is: will they be allowed to rebuild the demolished houses? And if so, under what conditions? Concern is also spreading among residents that in a few months they will be left alone with their problems. Many of them meet in the old school. Here, they can discuss, exchange ideas, take comfort.

The old school is also the meeting place of the crisis team, led by Gerd Baltes. As a retired police officer who served in Albania and Afghanistan, he saw a lot. But he never expected a flood like this. “At 2.20 meters, the firefighters are officially alerted. Here, they were already active before this point was reached. It all started in a fairly harmless way with a heavy downpour,” explains Baltes.

During the 2016 flood, the Ahr had already risen 3.71 meters above its banks, says the man from Mayschoss, “but this year it was 8.06 meters. After the night of the flood, seventy people had to be opened up on Thursday. ” Those who have lost all their belongings are partly accommodated in holiday homes in the village or in other accommodation nearby.

Due to the fact that three bridges are broken and the roads have been destroyed by the flooding, only a temporary asphalt road leads from a hill through the forest to the village, which is fed entirely from the outside. “It will certainly take a few years to get the infrastructure back to something like it was,” predicts the crisis manager, adding: “Of course, state funding is also absolutely necessary for this.”

Hike instead of an idyllic half-timbered house

Another city, another site. The small town of Kall in the Euskirchen district, 60 kilometers to the west, was also affected by the storm. Rail services have been suspended, and the new station forecourt, inaugurated just a few weeks ago, has been completely devastated.

Sidewalk slabs have been piled up, the freshly planted saplings are lying on their side. All the shops on Bahnhofsstraße were flooded; they have already been emptied and are empty, like the glacier which only opened this spring – “post-pandemic”. Garbage piles up everywhere in the streets of the small town not far from the national park. 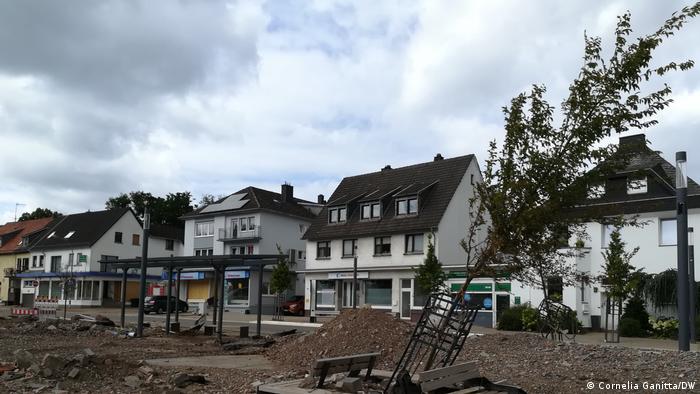 The destroyed square of Kall station

Kall is home to the Nordeifel Tourismus-GmbH, which among other things markets this gem with its 240 kilometers of hiking trails. Tourism in the northern Eifel normally generates an annual turnover of just under 390 million euros. But if there were already fewer guests last year due to the coronavirus pandemic, there will likely be even fewer this year. “On the one hand, we are concerned about the further increase in the number of infections,” said Chief Executive Officer Iris Poth. “On the other hand, many customers currently associate the Eifel with a ‘disaster area’.”

Indeed, municipalities like Gemünd, Schleiden and Bad Münstereifel have been hit hard and it will be difficult to restore charm, especially to half-timbered towns with their large-scale listed and protected buildings, which come with many requirements, explains. the tourism expert. .

“But beyond the valley, where rivers and streams overflowed, there are still the hotspots that provide reliable tourism with their hiking and biking trails.” For example, the former Nazi estate of Ordensburg Vogelsang, which is now part of the national park, picturesquely located on the Eifelsteig hiking trail and above the river Urft. 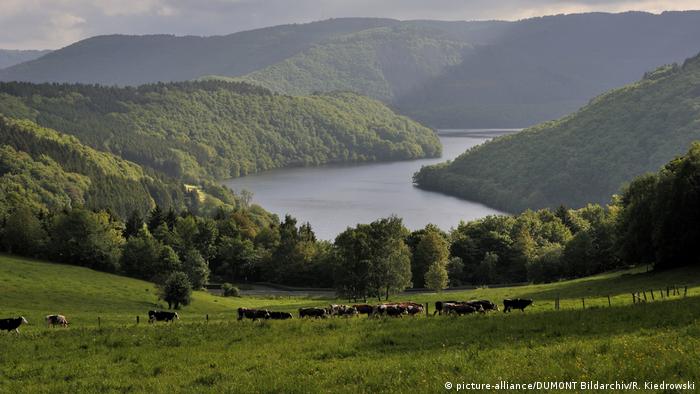 Hiking is possible ̶ especially at higher altitudes, like here on the Eifelsteig trail near Einruhr

Getting there is a real challenge

“What we’re waiting for is a stimulus package. Federal or state government grants, so that we have something that we can help businesses with at all,” Poth explains. Emergency aid of 5,000 euros for entrepreneurs is currently easy and unbureaucratic to obtain through municipalities, he says. “However, these only cover the most essential cleaning jobs,” Poth explains.

The biggest hurdle for the region right now is getting there. Road closures on the A1 and A61 motorways near Erftstadt hamper access. And the train, which crosses the Eifel between Cologne and Trier, can currently only be served by replacement buses. Eighty stations and six hundred kilometers of track were damaged by the storm, according to Deutsche Bahn. It will also take years to restore this infrastructure.

On the website of the Mayschoss-Altenahr wine cooperative, in exchange for a flood relief donation, you can receive a limited “surprise package” including bottles of wine that have been rescued from the debris of the flood.

This article was translated from German.

Taking a closer look at the coronavirus cases in Victoria, the state’s COVID-19 response commander …