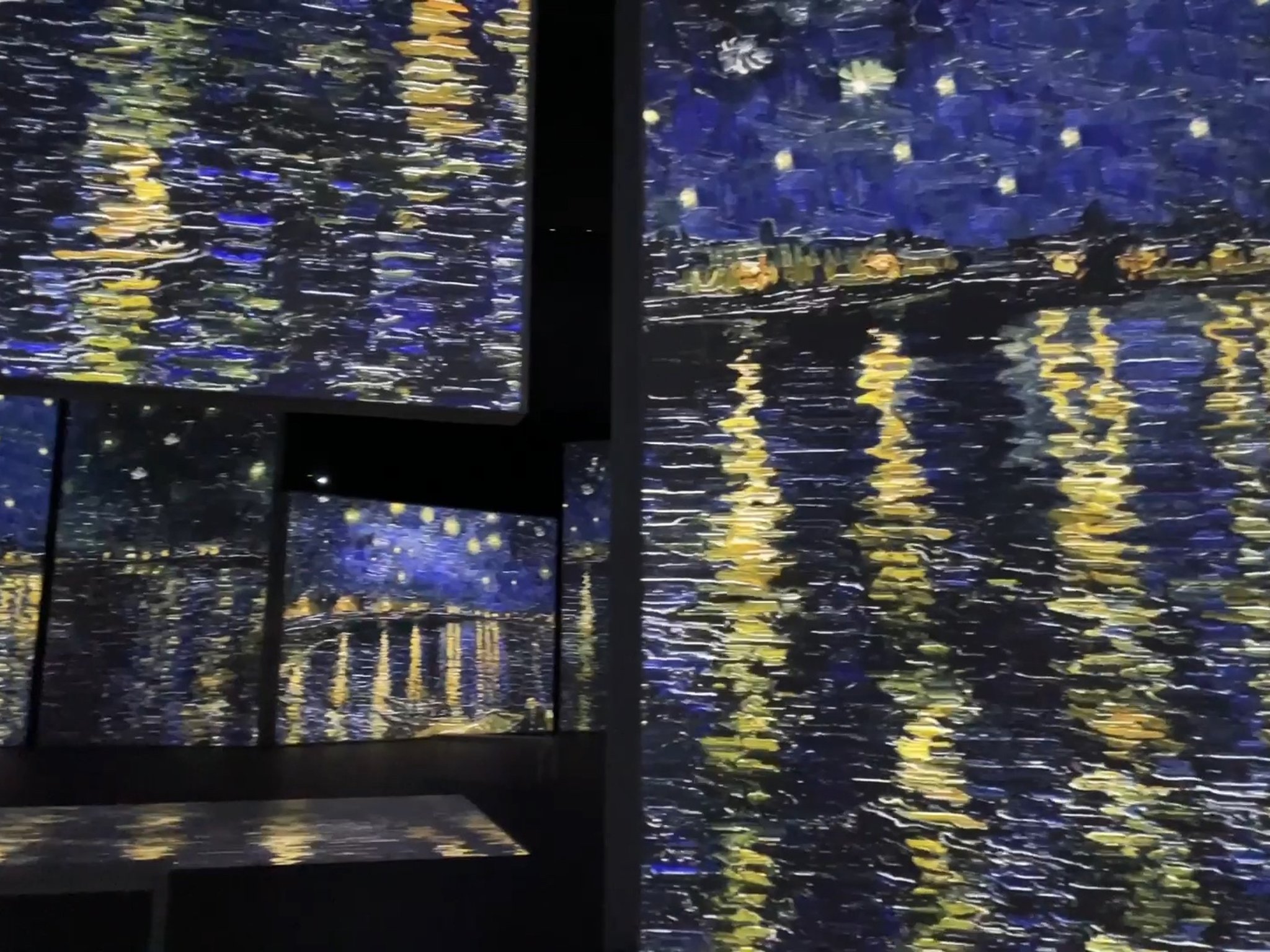 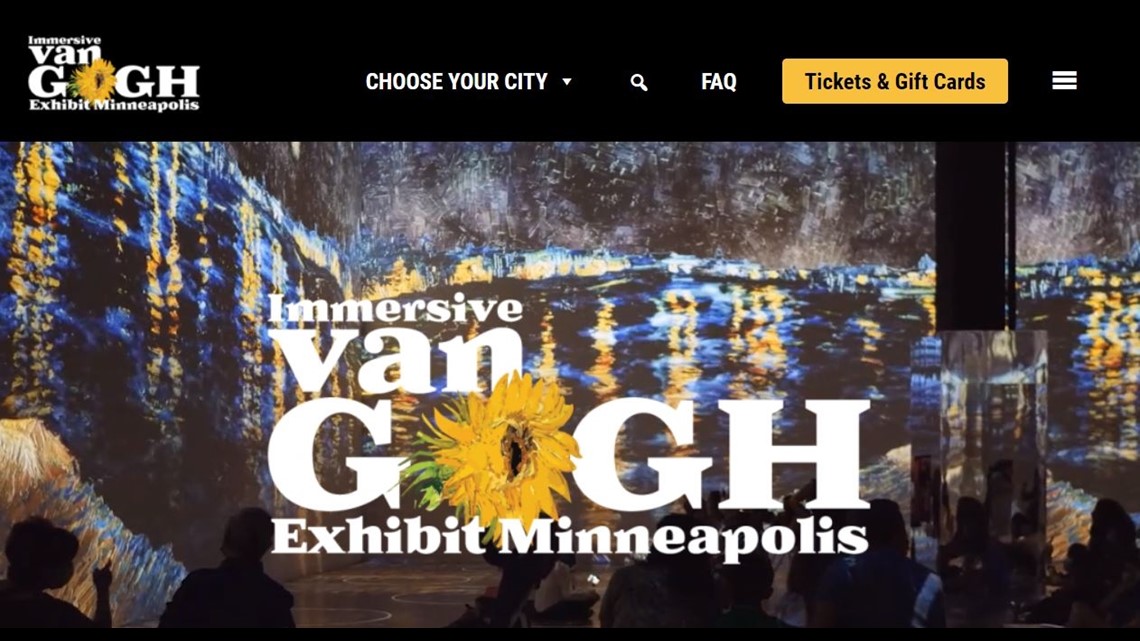 VLAARDINGEN / DOYMESTOWN – Every Sunday in Vlaardingen24: Vlaardingen in den Strange! The people of Vlardingen who have left Harringstad take it in turns to seek their fortunes elsewhere in the world, to give a glimpse of their life’s cuisine “in a foreign country”. Follow the trials of Wilma Hollander (Greece), Marijke Bersijn (Belgium), Dick van der Bell (France) and today Cora Flug Pot (USA).

Van Gogh Immersive Experience tickets were ordered two months ago. The location was not yet known, we just knew it would be somewhere in New York. August 5 was the day. Good weather, the place is well known and we are looking forward to it. I picked up Kobe and talked as we drive north. About two hours later the car was in the Staten Island parking lot and we walked to the free ferry. Masks required. These free ferries are not junior, operating 7 days a week, 24 hours a day, weekends every hour, weekdays every half hour. Crossing the Hudson River takes 25 minutes. The world famous view of the Manhattan skyline is impressive and still is. We sail through the Statue of Liberty and Ellis Island, where millions of immigrants entered America by boat at the end of the 19th century, to find their happiness, far from home and home, in unknown lands .

In these moments, I am very proud of myself. We did it anyway. We only live here, we made the big anonymous move after all, 21 years ago now. Cobie totally agrees and has the same sense of pride. Kobe eating herring from Katwijk and Cora from Haringkoop from Vlardingen.

We’re heading straight for Lower Manhattan. The skyscrapers that once housed the Twin Towers glow in the sun. The new Freedom Tower now stands proudly above it all. Lower Manhattan, or New Amsterdam, was founded by the Dutch in 1626. The Lenape Indian Territory. We did a great job in this Promised Land until the English defeated the Dutch in 1664. Then New Amsterdam was renamed New York. We get off the ferry and are instantly in the always crowded financial district. A very nice young man named Dutchman, trying to sell tickets for the tour bus with charm and funny conversation. But it doesn’t work for these two real Dutch girls and we wish the Netherlands a “good day”.

Close to the Van Gogh Show, we go in that direction in our spare time. We will soon find ourselves on the site of the World Trade Center, unfortunately known as Ground Zero. It is a place with a lot of feelings, thoughts and memories. It remains a place of sadness and respect. The footprints of the Twin Towers are like permanent waterfalls. Nearly 3,000 names are engraved in the black marble setting. I think it dates back to October 2001. We’ve been living in America for 14 months. I went to Ground Zero with our neighbor born and raised in Manhattan. A month and a half after September 11. The neighbor must have gone there, out of respect and as a kind of farewell. She asked me if I wanted to come, for moral support. A day that I will never forget.

The Van Gogh Experience is just around the corner. It’s pretty early, we walk a bit to Battery Park, where we buy coffee and sandwiches. We again enjoy the view of the Hudson River, the cafe and the people around us. Hilma was also due to come with us, but she couldn’t join us at the last moment. Now is a great opportunity to find the right person, to delight them with Hilma’s entry ticket for the Van Gogh experience. Our entry time starts in half an hour. My first attempt with a Pakistani. He eats a sandwich in the sun. He should go back to the office. A very decent lady who walks her bikini. We skipped it, as she could easily buy a ticket on her own, apparently. I ask a young woman if she would like a “free ticket” to the Van Gogh show. “Oh no !!” Said. It was fair and I had to buy an extra ticket because she accidentally bought tickets online for the Van Gogh fair instead of this scene. It was unfortunately “bad timing”. An old Chinese man sitting on a bench. As soon as I start talking to him, he gets up, waves his arms in panic “No no no no” and runs as fast as he can. Our next victim is a young woman on a bench. She looks at her cell phone while she eats her lunch. What a pity, she loves it, but unfortunately she has to get back to work. She is a social worker and people are waiting for her. She thanks us 10 times and thinks we’re “cool”. We have to hurry now. The seat on the left is a “handsome man,” and the seat on the right is a lady wearing a cheerful colored hat. Eni Min Mot… The woman with the hat. She makes a relaxing (non-English) video call with a family member. I had already seen and heard it half an hour ago, so we were allowed to disturb for a while. She’s from Mexico. She is very excited. She had already walked through the entrance, thinking she would love to take a peek inside. She handed him the ticket and Kobe and I quickly walked over to the immersive Van Gogh experience. The woman wearing the hat is already inside and making the most of it. After about an hour and a half, we were back outside. Fantastic experience, as if you have just landed in Vincent’s paintings. A good man should know how famous and loved he is around the world.

It’s time to go home. We’re just snacking on an impossible burger on a city park bench. Local teens show off their skills on skateboards, benches, stairs and walls. The ferry is already waiting for us. We admire the view again, with a beautiful sun, which very slowly prepares to disappear beyond the horizon. The golden / orange glow of a sunset makes Lady Liberty shine with pride.

When we are on the road, we come home before dark. It was an amazing day. A great New York City, but after so much hustle and bustle from The City That Never Sleeps, it’s still nice to come back to calm and beautiful Bucks County.
Cora Flug